July 2021 Supporter of the Month 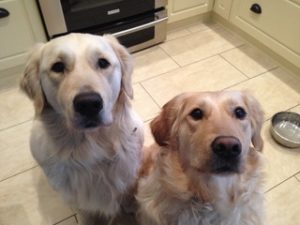 Thank you, Briscoe and Scarlett, for being the Supporters of the Month!

Briscoe and Scarlett are 9 year old Golden Retrievers. Briscoe was a planned addition from a breeder. When they arrived to pick him up, they learned about a female puppy with such a severe heart murmur that she wasn’t expected to live past 6 months. She was going to be euthanized. The family immediately decided they would bring home Briscoe and the sick puppy, who they named Scarlett.

Briscoe is named after Det. Lenny Briscoe from Law and Order. Scarlett got her name because Rhett Butler was the name of the breeder’s champion Golden Retriever. It seemed like a good idea to give Scarlett a name associated with a champion. 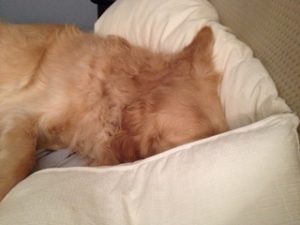 Scarlett was brought to a heart specialist who agreed that the puppy was very ill. He performed surgery to help her. The surgery went so well she was given a very good chance of living a full life. Scarlett still has a heart murmur, but she is doing well, 9 years later.

Briscoe is a cuddly dog who follows them around, and is constantly by their side. He has an odd habit of sitting on chairs like a human.

Scarlett eats everything. She loves food, but she also eats cell phones, remotes, your lunch, books, and whatever else she can find. She sleeps with her face straight down, buried in pillows or blankets. Her caregiver says Scarlett is a little naughty but she is so sweet she can get away with it.

Briscoe and Scarlett hate to be apart. They get upset if the other isn’t there. Each night, they have a “Dinner and a Show.” They eat dinner, then play fight.

Their caregiver says Briscoe and Scarlett are the center of their world. The family would be lost without them.  (courtesy of Heather) 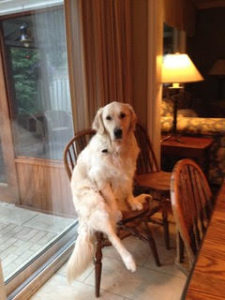 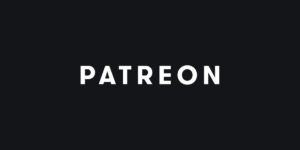 My goal is to pet all the dogs I can and share their story with the world. By supporting me, you are helping to pay for the costs associated with my goal, including maintaining my website, providing content, hours of work, and helping me earn money toward college.

By supporting I’ve Pet That Dog, you can receive additional dog content (including pictures and videos), behind-the-scenes stories of my adventures, and entrance into drawings for merchandise, or even a Zoom call to meet your dog!